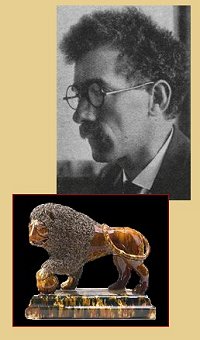 If you were a Progressive labor reformer and union organizer, author of an influential and muckraking study on the scandal of child labor in mines, but for medical reasons you had to move from New York to Vermont and find a more genteel activity for a time, what would you do?

Well, if you were John Spargo [1876-1966] you’d start collecting Bennington Pottery and write a definitive study of the two 19th century Bennington potteries and their wares.

Born in Cornwall, England, Spargo earned his early living cutting granite while he took extension course at Oxford and Cambridge. He became a union organizer, and when he moved to New York in 1901, he became a leader of the American Socialist Party. He resigned from the Party during the First World War because of its antiwar policy, and then formed the American Alliance for Labor and Democracy with Samuel Gompers.

A prolific writer, his most influential book was “The Bitter Cry of the Children”, a 1906 expose of the scandalous use of child labor in coal mining. After World War I Spargo’s politics continued to evolve, and he later became an advocate of free-market capitalism.

He moved to Vermont for health reasons in 1909, and he naturally became interested in early Vermont history and industry. This led to a study of the history and wares of the Bennington potteries. In 1926 he wrote his magnum opus on the Bennington potteries, "The Potters and Potteries of Bennington". He relates in the preface that “many of my personal friends have been surprised to find me interested in ‘old cracked teapots and dishes”, but that he had always been intrigued by antique china, and that the hobby of china collecting has a long and storied history, having been practiced by George Washington, Samuel Johnson, and Horace Walpole. Further, as an adopted Vermonter who quickly grew to love the state and its heritage, his “interest in the history of the pottery industry at Bennington was part and parcel of my interest in the history of the foundation of the Commonwealth itself”.

Well, there you are. No further explanations needed.

Spargo would become the Director-Curator of the Bennington Historical Museum and write several other books on ceramics, including “Early American Pottery and China”, and “The A.B.C. of Bennington Pottery Wares”, as well as books on Vermont’s covered bridges, the Bennington Battle Monument, and Anthony Haswell, the Revolutionary printer and balladeer. Although he wrote many years ago, Spargo was a careful and skilled researcher thoroughly involved in his work, and his books remain important references.