This is the story of a gigantic (so to speak) scholarly “oopsie”.

In late 1915 Gisela Richter, renowned expert on Greek and Roman antiquities at New York’s Metropolitan Museum of Art, received a letter from John Marshall, the Museum’s veteran purchasing agent in Italy, describing a newly discovered life-size Etruscan warrior figure in terra-cotta which had been discovered in an Italian field. The “old warrior” (he had a white beard and was emaciated, somewhat like, as one observer commented later, a Giacommetti sculpture) was soon followed by a massive four-foot tall terra cotta warrior’s head, and there was even talk of a greater treasure waiting to be found... 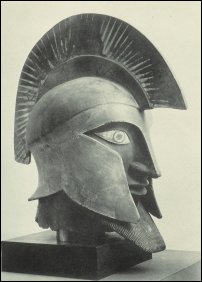 When they returned they began their most audacious project yet- a Colossal Warrior in terra cotta, standing over eight feet tall. Then tragedy struck. Riccardo was killed in a fall from his horse that winter, and his place was taken by two less-skilled cousins. As with the earlier pieces, the statue had to be fired in pieces as it was much too large for the kiln.

Attempts to erase doubts that were already being whispered in art circles in Europe, as well as the hope that the “secret” field they had been found in might be divulged by their “discoverers”, delayed the publication of a scholarly monograph on the three figures until 1937. For Richter, bringing them to the Met. and publishing them represented one of the crowning achievements of her distinguished career, and it was undoubtedly this fact that blinded her to what was becoming all too obvious to other scholars who were not emotionally or professionally attached to the warriors.

The talk about their true origins swirled quietly for the next decade or two, but after a visiting Italian scholar was offered a chance to see all three statues in 1959, and commented that he did not need to see them since he knew the man who had made them, authorities at the museum decided something had to be done. In 1960 a series of tests concluded that the glazes on all three specimens contained chemicals which had not been in use before the 17th century, and in 1961 Fioravanti signed a confession of the whole affair, and supplied a missing thumb which fit perfectly.

At that point several other “bothersome” points that had been noted over the years began to make more sense- the Colossal Warrior, for instance, could not even support its own weight, and when compared to real Etruscan statuary, simply looks crude and even modern. Today the statues are stored far away from prying eyes, but they still provide an entertaining and sobering lesson in fake busting.

A much more detailed account of the warriors was written by David Sox in his excellent book “Unmasking the Forger, The Dossena Deception” (1987), from which most of the material for this essay was taken; Thomas Hoving, the former Director of the Met., also deals with the story, and speculates on the role of John Marshall, in his book "False Impressions: The Hunt for Big-Time Art Fakes" (1996). 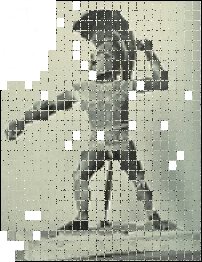